To the west of the Filija mountains, the westernmost edge of formal Imperial expansion, lies the semi-wild country of Osnabis, or as it is known to most of its residents, Ashnabis. Ashnabis was never conquered but was definitely settled by Ombesh speakers in the century or so before the end of the empire, and more sporadically afterwards. Ashnabis is home to the Aumma, speakers of the Aummesh language descended from and related to Ombesh, influenced by many of the local peoples who lived here for centuries before.

The area of the Filija mountains proper in the southeast is sparsely inhabited by shepherds and farmers, but is largely impassable in many places. In the south runs the broad Kaskos river, home to fishers and farmers as well as the Kaskos pirates who are both boon and bane to the local populace. In the far south, the pastures are vulnerable to raids from the winged bloodsuckers of Fliitangir (Zind / Tshiin) beyond its southern borders. The Kaskos flows into the great Sestapor swamplands along the western coast, which are only lightly populated and parts of which are extremely poorly known even to locals. The elusive hith live in the coastal lowlands, lagoons, and islands. In the north, the mountains give way to rolling hills, and the population here is highly diverse and includes some communities of Hulti (Old Folk / shaman worshippers) who live in isolated valleys. In the far west, people related to the stout Tzameddi (Ghuzmadai) live almost untouched by the Empire and its ways, worshipping a variety of strange gods. In the northeast, Choradan’s strong military has established a number of outposts, forts, and garrisons, and Ombesh speakers are common here in the coastal maritime villages that depend on trade from the east. The political structure of Ashnabis is diffuse and contested; there is no central authority, but a set of local mayors, village elders, chieftains, and warlords. 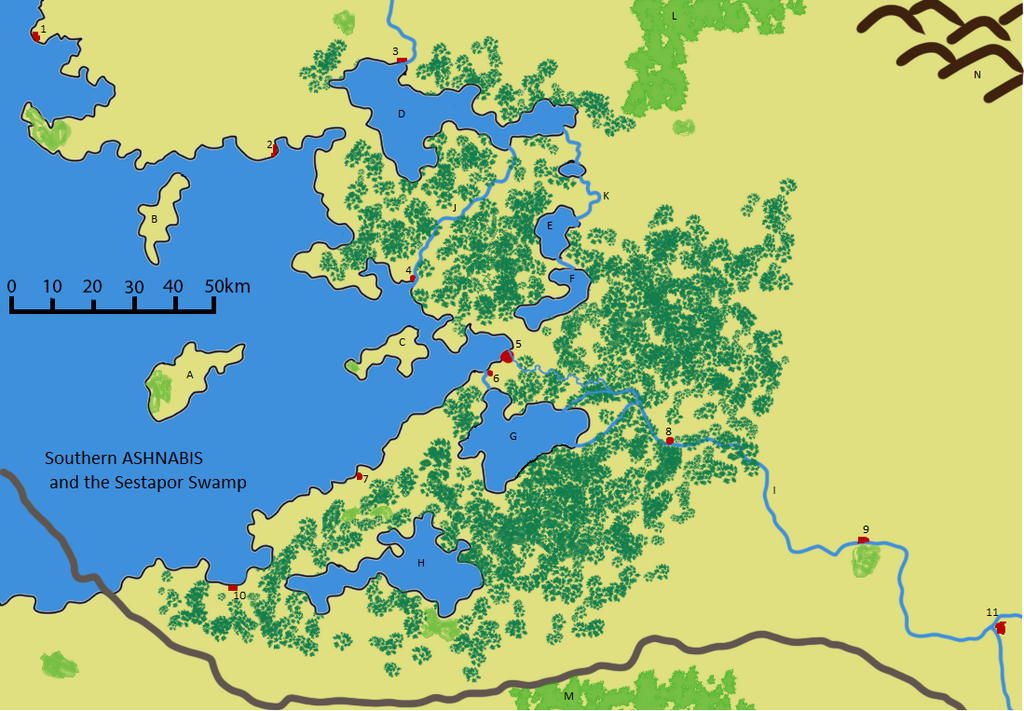 The Sestapor Swamp is a large riverine freshwater swamp with brackish tidal estuaries. Spanning around 120km from north to south and 75km from east to west, it occupies the largest part of southwestern Ashnabis. While not heavily populated, it has experienced economic growth with the discovery of fos in the region and the founding of the Kaskind Territory around fifteen years ago. Other than in Kaskind, the settlements of the Sestapor are mainly inhabited by Aummesh speakers.