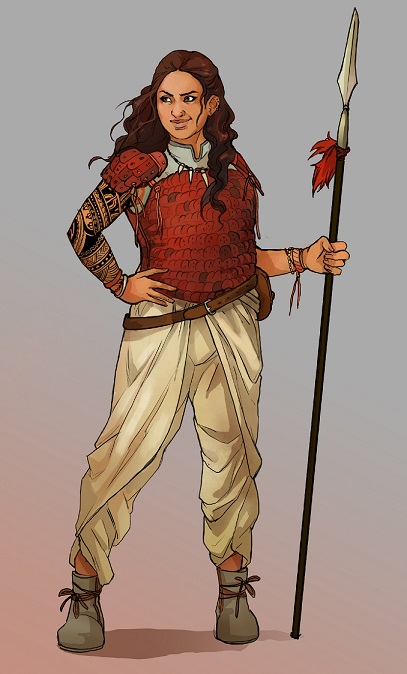 Katenzhi was born in Choradan, the only daughter of Romoga and Shiklazh of the Lovresi family, a merchant caravan clan that traced its roots back to the great traders of the old empire. Her mother drove the wagon from town to town and her father haggled with the vendors and other merchants along the way. For generations they had been under the protection of the local warlords who allowed them to trade openly throughout their territory, provided they paid their taxes. Had she stayed, Katenzhi herself might have ended up a soldier or even a sentinel in some warlord’s army, but fate had other plans.

When Katenzhi was four, a war broke out between several rival warlords with territorial ambitions and their caravan was caught in the middle. It was raided and burned and many of her family, including her older brother, Diroga, were killed in the raid. She never forgot the sight of their deaths or the banners of the army that slaughtered them.

Katenzhi’s family was fractured and scattered, and only the small group of her, her parents, and her newborn cousins, (Josh and Hazel’s characters), escaped through the western mountains to Ashnabis, eventually settling in Ratsla, a small fishing village along the southern coast.

That was the first time Katenzhi had ever seen the sea. It was enormous and wild and powerful, and she fell in love with it immediately.

Katenzhi’s parents quickly re-established their trading business in the new town, this time taking advantage of the ocean to move their goods. They started with one small barge and only themselves and a locally hired sailor as crew. Their trading acumen and a willingness to trade with anyone, whether Ashnabi, Hith, Duedarcian, or Tzameddi, helped them grow their new business quickly, eventually turning it into a small group of trading ships that plied the entire western coast of Ashnabis.

Katenzhi, meanwhile, grew up on her parents ships, raised as much by the rough and tumble sailors that made up the crews as by her own family. She learned to sail, to fight, and to judge people by their actions rather than their appearances. She became known for her fiery temper and obstinance, never backing down from a challenge and always trying to push her limits. She also picked up other maritime mannerisms and habits, including a tendency to swear and a dangerous fondness for alcohol and drugs, including fos.

As a teenager she discovered that she had a particular talent for channeling fos into magical effects, although not always in the most controlled, or even safe, way. Despite setbacks and accidents (Including one regrettable incident which saw an entire cargo of salted fish and one of the family’s ships lost to the waves), she began to refine her talents in her own way, without the benefit of formal magical training, eventually gaining a modicum of control over the negative effects of her magic. She began to focus her attention on weather spells, controlling the winds and waters to help her family’s business and protect their ships, which her parents eventually agreed came out as a wash considering her earlier… difficulties.

Although the family often traded in small amounts of fos, it was never a large part of their business. They preferred to trade in safer commodities like food, textiles, and raw materials. Recently, however, the sheer amount of profits in the fos trade coming out of the upriver communities has made the prospect of breaking into the business more appealing, especially to Katenzhi and her cousins. Together they persuaded her parents to let them take a small keelboat upriver in a bid to establish a relationship with one of the firms producing fos from the swamps.