Difference between revisions of "Kaskind Territory: Map and Communities"

The Kaskind Territory is the area immediately surrounding the fort town of Kaskind, the heart of Ombesh colonization in the Sestapor swamp, where the Kaskos River meets the sea. Centered around the newly-discovered sources of fos in the area, Kaskind is ethnically and politically highly diverse with newcomers, while the territory’s population is still probably 70% comprised of the Aummesh folk who have been living here for centuries. It is a moderately warm subtropical area with substantial rains and mild winters. 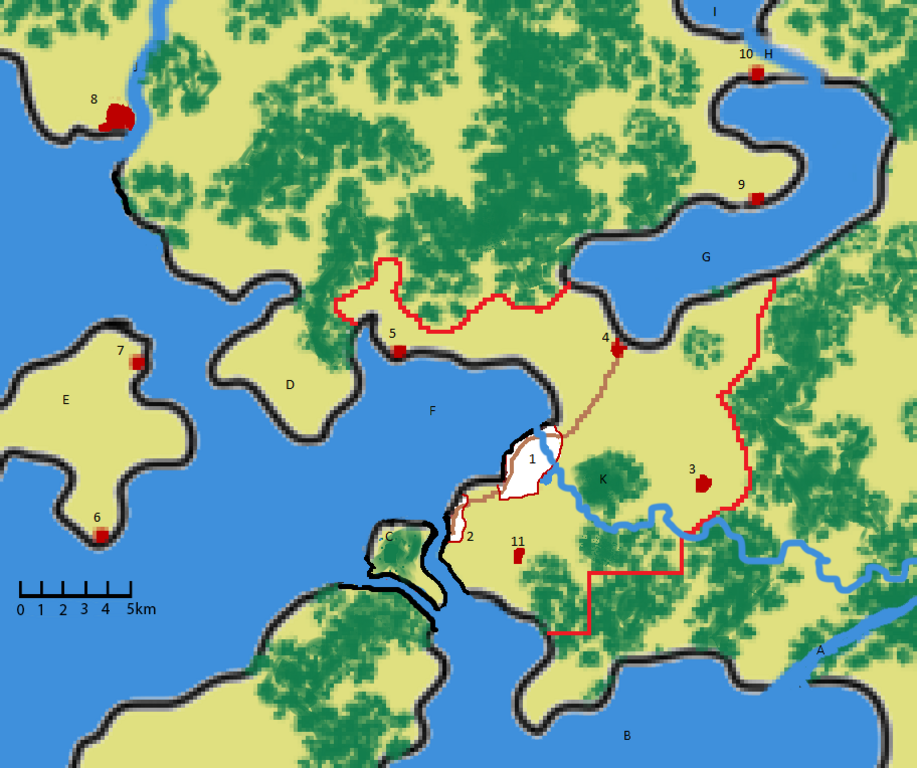 1. Kaskind: Capital of the Kaskind Territory, founded 15 years ago with the foundation of Fort Kaskind by a legion of sentinels from Choradan. Now around 5000 people, growing rapidly over the past five years with the fos boom, highly nationally diverse. Kaskind is ruled by General Ghurtai, the ranking Sentinel who has been responsible for the defense of the colony almost since its founding. The North Kaskos (Maripak) River runs through the northern part of the town into Nimneha Bay. The Colony Road goes from Timiil at the west to Baziri at the east and joins the Kaskos River system to Lake Tsidul and to the northern passes towards Choradan.


2. Timiil (Ombesh: Timilt): The principal Aummesh community of the territory, located where the Kaskos delta meets the coast, just a short walk from Kaskind. Population, around 1200, around 90% Aummesh. It is a longtime fishing and trading community that has experienced some of the benefits of the nearby (and now much larger) Ombesh town of Kaskind, but nonetheless is seen by the interlopers as a second-class kind of place, full of taverns and entertainment but not much more. Its nominal mayor is the elderly Koptus Belidomi.


3. Zhumne: A religious community to the east of the colony, founded eight years ago by a major contingent of the Hand of the Dead from Hasmala, led by High Priestess Jorota. Its human population is around 450 with a population of bubun of around four times that amount, and its economy is entirely centered around growing and processing fos for shipment back to Ombesh countries. The Hand has used its enormous wealth to purchase others’ claims and farms in the region, using bubun as farm labour and hiring herbalists and other experts for processing fos. Zhumne now rivals Kaskind for wealth and influence in the territory, despite its much smaller size. It is not a closed community, and the temple here does serve the needs of the territory, but most are encouraged to worship at the temple in Kaskind and leave the priestesses, and their undead charges, to their work. Because it has such a large population of bubun, it is an eerie place to visit.


4. Baziri: A lakeside town of around 250, at the north end of the short Colony Road and the south shore of Lake Tsidul. Founded around ten years ago as a Ombesh trading outpost and still largely serves that function, bringing goods from the north and transporting fos back.


5. Shuggep: A small and once-isolated Aummesh community of fishers and sailors, historically unwelcoming of strangers but now caught up in the fos boom, with several active fields to the north of the town. Around 250 Aummesh live here, and an increasing number of Ombesh colonists. It is known that the hith have an underwater community somewhere off the coast nearby, but its precise location is not widely known.


6. Naguur: A town on the south coast of the island of Ruur, almost entirely an Aummesh population of around 200, focused on the whaling economy. The pirate Yeggun is known to have a base here from which to keep an eye on activities in the territory.


7. Pashas (Hithaeli: Pfaeshes): A semi-aquatic town on the north coast of the island of Ruur, with a mixed population of Aummesh humans and hith. Extremely unwelcoming to visitors.


8. Charadip (Ombesh: Zhardif): A growing town to the northwest of Kaskind, originally an Aummesh community at the mouth of the Yerta River but now increasingly mixed as Ombesh from Basai (in particular) move in. The Chancellor’s delegation of mystics has set up a rival community to Kaskind here, led by the wily Zabim, using the threat of magical intervention as a tool to maintain independence.


9. Hapaan: An Aummesh town on the north shore of Lake Tsidul, known for being particularly unfriendly to Ombesh traders, whom they tolerate only because of the revenue that the trade along the lake has brought. Strongly suspected to be the home of factions that want to see the Ombesh fail.


10. Uzino: The northernmost community with a significant Ombesh influence from Kaskind. Built by Choradan around ten years ago where the Teradu River meets Lake Tsidul, as the first stop along the northward routes to Ombesh lands. It serves principally a defensive function and collects tariffs.


11. Banei (Toadtown): The Corpseborn community that, for generations, has stood at the outskirts of Timiil, and now, with the formation of the town of Kaskind, has grown into a small town of perhaps 200 Corpseborn of mixed Ombesh and Aummesh ethnicity.

A. Kaskos River: The Kaskos River flows west from the mountains and finds its mouth here in the heart of the Sestapor swamp. The main river channel empties into Sebor Inlet and then out to the sea. It is slow-moving and although swampy in places, is readily navigable by the highly trained Kaskos riverfolk. It serves as a conduit for goods and information throughout all of southern Ashnabis, and dozens of Aummesh communities lie along its banks.

B. Sebor Inlet: A large brackish estuary, that connects the Kaskos River to the sea. It is a major conduit for trade, but most of its banks are not very suitable for inhabitation.

C. Wurein Island: A low-lying swampy island at the mouth of the Kaskos where it meets the sea. Uninhabited, it is occasionally visited by Aummesh youth from Timiil looking for privacy, but is also, legendarily, haunted.

D. The Auggi: A rocky outcropping, probably once an island, separated from the rest of the mainland by a largely impassable swamp and reachable only by boat - and even then, only with risk. There is a very old Aummesh mausoleum here, for an all-but-forgotten community, but remains tended by the Voice of the Dead.

E. Ruur Island: A rocky island with two major Aummesh communities, Naguur and Pashas, the latter of which also has a significant hith population. Little agriculture can be practiced here other than home gardens, and the main economy is fishing and whaling.

F. Nimneha Bay (Aummesh: Niineha): The deep bay on which the major ports of the Kaskind territory all lie, including the deep harbour at Kaskind.

G. Lake Tsidul: A large lake connecting to the north, whose southern shores mark the northern boundary of the Kaskind Territory. Reedy and difficult to navigate except by skilled pilots, although recently there have been efforts to clear its vegetation.

H. Teradu River: A river system heading north out of the Sestapor across a set of low-lying lakes. The main conduit northwards out of the Kaskind territory.

I. Lake Nutin: A lake, north of Lake Tsidul, along the Teradu system.

J. Yerta River: A river, flowing south from a set of lakes to the sea, where the town of Charadip is located. A newly active trade system is beginning to form along this area, promoted by the mystics of Basai who have a large settlement along the coast.

K. The Firsting: A small patch of swampy land where the first fos was discovered. Although the fos has largely been tapped out of this small area now, it is used for training for children and newcomers to the area before they go out looking for new patches.

L. Maripak River (North Kaskos River): A winding branch of the main Kaskos that meanders through the Sestapor, with its mouth in the town of Kaskind. It is navigable by small boats but not by larger cargo ships and barges, but many small Ombesh fos operations and Aummesh homesteads lie along its banks.